Sometime ago, a sailing friend of mine expressed his interest in receiving Navtex. Being a radio ham, I immediately started searching the www to get some more information about it. Navtex is is a system for relaying messages to mariners. The world is divided in regions, and in each region there are a number of coastal transmitting stations which send out maritime messages. Each station uses its allocated 10 minute timeslot within a 4 hour period. Thus, in a certain region, there is room for 24 stations to transmit their messages in turn.

The number of homebuilt receiver designs I found on the www was not very big, but one hit was very interesting. A Finnish radioham, Mikael Nordhamm presented an interesting design on his site. He built a simple receiver, with a decoder based on a PIC micro. The messages were stored on a graphical display. Because the PIC has too little memory to store 4 hours of messages, he used the 8kB memory of the display. I liked this approach very much, so I started to build a receiver according to his design. Unfortunately, I couldn't get it to work properly. The HF-part seemed too insensitive and the LF part was oscillating, even without an input signal. Furthermore, the decoder didn't work on the 1.5 kHz LF which I had choosen. I choose an LF of 1.5 kHz because it would allow me to use available PC software (SeaTTY and MixW) for testing the decoder and the receiver.So I decided a different approach was needed. I ordered a Navtex receiver kit from Kent-Electronics.nl, which worked perfectly after completion in combination with a PC, even without properly tuning its two coils. A 3 meter 'long' wire antenna in my attic was enough to receive several coastal stations. I am located near Eindhoven, which is about 150 km away from the coast. The Navtex transmissions on 518 kHz carry quite far, I could even receive Talinn, England, Northern Africa and some Mediterrranean stations. 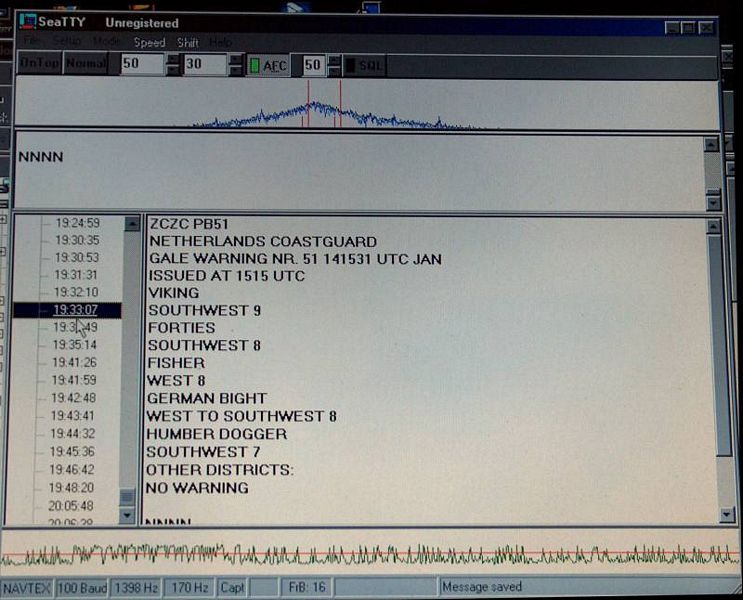 Since the ultimate goal to build a stand-alone receiver still existed, I started to build an HF front-end, based on the Kent design. It comprises a cascode HF amplifier with 2 FETS which can be found on quite a few sites. For the coils I used a couple of retuned 455kHz IF transformers salvaged from an old portable transistor radio.

The NE612 mixer after the HF amplifier is followed by two op-amp band-pass filters, an extra gain stage and a threshold circuit., The resulting signal is fed to the PIC micro which runs and adapted version of Mikael Nordmann's code. click here for diagram I built my circuit on perf-board and the result is a rather compact unit.

The receiver has been in operation for the past months here, and it is really fun to see all the messages about missing buoys, gale warnings, wheather forecasts and other items a mariner might be interested in. It's time to get my boat into the water.......

If you would like to get more info or the PIC software then send an email to PE1ROK at michaelhompus.nl, and I'll get back to you.